We are a smoke free and tobacoo free campus

Rangeley Health and Wellness and Frank 107.5 & The Wolf 99.9 are proud to present 38 SPECIAL and The Marshall Tucker Band live in concert, performing at the Rangeley Wellness Pavilion, Dallas Hill Road, Rangeley 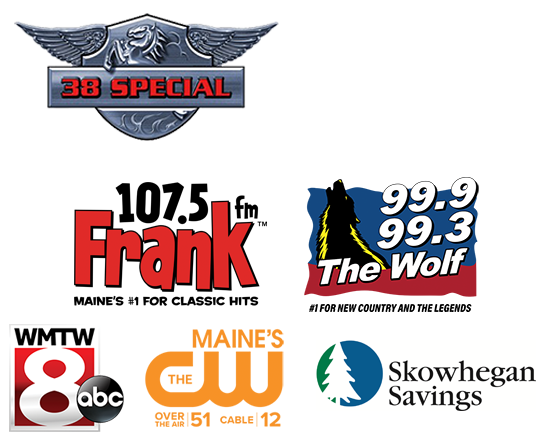 After more than four decades together, 38 SPECIAL continues to bring a signature blast of Southern Rock to over 100 cities a year. And at each and every show, thousands of audience members are amazed by the explosive power of the band’s performance. Their many Gold and Platinum album awards stand in testament to the endurance of a legendary powerhouse.

With sales in excess of 20 million, most associate the band with their arena-rock pop smashes, “Hold On Loosely,” “Rockin’ Into the Night,” “Caught Up in You,” “Fantasy Girl,” “If I’d Been the One,” “Back Where You Belong,” “Chain Lightnin’,” “Second Chance,” and more – Timeless hits that remain a staple at radio, immediately recognizable from the first opening chord, and paving the way to their present-day touring regimen.

Guitarist/vocalist DON BARNES says it’s all about maintaining that intensity in their live shows. “We never wanted to be one of those bands that had maybe gotten a little soft or complacent over the years. We’re a team, and it’s always been kind of an unspoken rule that we don’t slack up, we stack up. We go out there every night to win.” Completing the team is bassist BARRY DUNAWAY, drummer GARY MOFFATT and keyboardist/vocalist BOBBY CAPPS. The most recent addition to the band is legendary virtuoso guitarist and vocalist JERRY RIGGS. For 38 Special onstage, it is a celebration of camaraderie and brotherhood, a precision unit bringing the dedication and honesty to a long history of classic songs, as well as surprisingly fresh new material. Since 1976, the band has released more than 15 albums. And from the start, they’ve toured relentlessly, bringing their signature brand of ‘muscle and melody’ to fans worldwide.

In the early fall of 1973, The Marshall Tucker Band was still a young and hungry group out to prove themselves every time they hit the stage. “We were a bunch of young guys who didn’t know any boundaries,” says founding member and longtime lead singer Doug Gray. Now they are celebrating with their 50th anniversary tour!

Still led today by founding member and lead singer Doug Gray, they represent a time and place in music that will never be duplicated. Gray is quick to credit the band’s current dynamic members with carrying on the timeless essence of The Marshall Tucker Band sound. Current members include the highly respected drummer B.B. Borden, a former member of both Mother’s Finest and The Outlaws, multi-instrumentalist Marcus Henderson of Macon, Georgia, plays flute, saxophone and keyboards in addition to lead and background vocals, Pat Elwood on bass guitar, and Rick Willis on lead guitar and vocals, both of Spartanburg SC, are disciples of the Caldwell Brothers. Acclaimed lead guitarist and vocalist Chris Hicks recently rejoined the band after a two-year absence. Together they present a powerful stage presence as they continue to tour the country and continue to be powerful force in the world of music.

Years of rigorous tour schedules earned the band the respect of critics and countless dedicated fans. With hit singles like “Heard It in a Love Song,” “Fire on The Mountain,” “Can’t You See,” and “Take the Highway,” The Marshall Tucker Band earned seven gold and three platinum albums while they were on the Capricorn Records label. During the 90’s, the MTB scored four hit singles on Billboard’s country chart and one on Billboard’s gospel chart. Their music has also been featured on the soundtracks of movies such as Smokey and the Bandit, Blow, The Pursuit of D.B. Cooper, Shipwrecked, Crank 2, Don’t Mess with Zohan, Stop Loss, Swing Vote, Taking Chance and many others as well as many TV Shows.

“The buying public never really cared whether we were country or rock & roll” says Gray. “They called us a Southern rock band, but we have always played everything from country, jazz, blues, rock & roll and all things in-between. As we’ve become older,” Gray grins, eyes twinkling, “our Southern heritage seems to come out even more. But no matter how old we get we can still rock your socks off.”

Rangeley Health and Wellness has been bringing legendary rock and country bands to the western mountains of Maine since 2007 with performances by Foreigner, the Beach Boys, Doobie Brothers, Travis Tritt, Gregg Allman, Kenny Loggins, Craig Wayne Boyd and Josh Turner, Clint Black, Creedence Clearwater Revisited, Starship, the Steve Miller Band and the Guess Who. All proceeds from these benefit concerts support services provided by RHW including children’s and senior wellness programs, physical rehabilitation services, behavioral health and so much more.

RHW is a non profit 501(c)3 whose mission is to facilitate and advocate for health and wellness in the Rangeley Lakes region. We are generously supported by individual donors, private foundations, grants, municipal funds, special events and a host of dedicated volunteers. We are here for your well-being!